Please contact your TAM before using the information in this article, if you are an Acquia client that has a Technical Account Manager (TAM), and you have questions about your initial setup of Akamai.

The following are several tips and tricks that will help the Akamai content delivery network (CDN) work well with Drupal in Acquia Cloud.

Turn off Cache Purge Logging for the Drupal 8 Module.

as outlined in https://www.drupal.org/project/akamai/issues/3001392 The Akamai module for Drupal 8 stores the Purge status in a key_value pair.  On a busy site with many content updates, this can create performance problems as keeping track of a large amount of data in a single table row is poor design.

If you need to have the Akamai module installed, then from the purge settings, /admin/config/akamai/config set the Purge Status expiry to 0 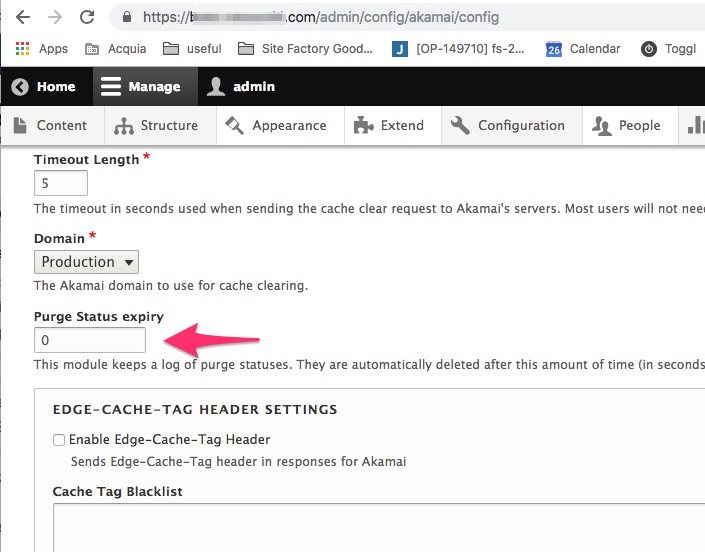 Using an edit domain with Akamai

Some of our customers using Akamai may want to set up edit domains for their authenticated users. Acquia recommends you discuss with Akamai whether doing so is appropriate for your website's needs.

You can download and install the Akamai module to help you purge items from the Akamai cache. This module lets you purge content programmatically, as well. For example:

The following commands use the cURL command-line tool. For more information about how to use cURL, see cURL's documentation .

If your website is experiencing performance issues, you can troubleshoot these issues by examining the response headers Akamai sends to your browser. Response headers are what HTTP servers send your browser to show you how content is being returned and how it should be handled. These headers return a lot of debugging information about the Akamai configuration and the state of the response.

Akamai's SureRoute technology helps speed up your website's performance by ensuring non-cacheable content is fetched using the fastest possible route between Akamai's servers. To use this service, you need to put a SureRoute test object on your origin server. SureRoute fetches this test object from the origin using various different routes. These fetches of the test object are called races. When a real request comes in, SureRoute consults its latest race data and picks the fastest path from the edge server to the origin.

Here is an example request for a SureRoute test:

If the preceding conditions are met, for each individual machine and unique SureRoute stat key, the test will run:

Akamai cache keys are case insensitive. This can cause a redirect loop to itself for the duration of the cache lifetime if subsequent requests to the URL contain changes in case.

Example: A site visitor requests www.yourdomain.com/OurMission where two letters are capitalized. The edge server does not have this object in cache and forwards the request to the origin server. The origin server sends a 301 redirect to the existing cached object (www.yourdomain.com/ourmission ). These two URLs have the same cache key, and the 301 redirect is what is cached for 1 hour on the edge server. Any request for that URL will get a 301 redirect to itself (loop) for the duration of the TTL. To test this, submit a purge for one of the URLs, and make a request for the same URL with at least one upper case character.

Solution: In the Luna control panel for the domain in question, disable the “Ignore Case in Cache Key” setting. By default it is set to "enabled".

For several other key points and settings you should know about, see Configuring your Acquia Cloud sites to use Akamai. For more general information on content delivery networks and other providers, see Using a Content Delivery Network with Acquia Cloud.